HISTORIC DAY: Concession agreement Signing Ceremony for development and economic use of Zagreb Deep Sea container terminal in the Port of Rijeka

The Signing of the Concession Agreement for the Development and Economic Use of the Zagreb Deep Sea Container Terminal in the Port of Rijeka was held at the Maritime and Historical Museum of the Croatian Littoral in Rijeka on Friday, November 5, 2021 at 11:00 AM.

The concession for the development and economic use of the Zagreb Deep Sea container terminal is granted for a period of 50 (fifty) years. The estimated value of the concession is HRK 20,543,241,942.00 (excluding VAT), and the determined amount of the fixed concession fee is EUR 2,000,000 per year. With this contract, the new concessionaire undertakes to build the necessary infrastructure and fully equip the Zagreb Deep Sea container terminal in Phase 1 and Phase 2 (construction of 280 meters of new shoreline and equipment) and guarantees a container traffic of 1,000,000 TEU in the first two years of terminal operation.

The signing of the concession agreement was attended by the Prime Minister of the Republic of Croatia, Mr. Andrej Plenković and the Minister of the Sea, Transport and Infrastructure Mr. Oleg Butković, Mayor of the City of Rijeka Marko Filipović, Deputy Prefect of the Primorje-Gorski Kotar County Vojko Braut, Danish Ambassador to Croatia Ole Henrik Frijs-Madsen and representatives of numerous companies and institutions. Representatives of the Maritime & Transport Business Solutions (MTBS) from Netherlands who were engaged as Port of Rijeka Authority´s Transaction Advisor in cooperation with Croatian Law firm Vukić &Partners Ltd. were also present at the Concession Agreement Signing ceremony.

On this occasion, Denis Vukorepa, Executive Director, Port of Rijeka Authority of stated: “Today we are signing the most significant contract in the history of the Port of Rijeka, significant in terms of in importance and value. The most important and largest component of the Rijeka Gateway project is the construction of the first phase of the Zagreb Deep sea container terminal. Formally and legally, the signing of today’s contract completes the World Bank project Rijeka Gateway, and since the new concessionaire at the Zagreb Deep Sea container terminal is called Rijeka Gateway, this project will live with us for at least another 50 years. With this implementation in the port area and the Rijeka traffic route, from the road D 403 to the new two-track (two-lane) railway, Porto Baroš, etc., Rijeka becomes the center of the world. ”

At the signing ceremony, Croatian Prime Minister Andrej Plenković pointed out that the concession agreement creates preconditions for Rijeka to take a leading role in transshipment of cargo in the northern Adriatic and becomes the most important sea exit for Central and Southeast Europe.

“The capacity and strategic position of the Port of Rijeka and the associated container terminal has been recognized by one of the world’s most reputable container terminal operators, APM Terminals, which operates eighty terminals worldwide. Here a domestic partner, ENNA Logic Partner gives additional credibility to the feasibility of this project, especially because ENNA Logic is involved in rail freight, which is a key link in the purposefulness of the construction of this terminal, said Plenković, who pointed out numerous supporting projects with the construction of the terminal, He called it unique not only in Croatia but also beyond, and expressed his satisfaction with the fact that this terminal would represent a great chance for the economic development of Croatia.  “In this small area of ​​Primorje-Gorski Kotar County we have an LNG terminal which puts us on the energy map of Europe, and with the new container terminal we will additionally position ourselves on the economic and transport map of the world”, said Plenković, concluding that the Government will continue with investment projects into transport infrastructure.

Minister of the Sea, Transport and Infrastructure Oleg Butković said that the port of Rijeka with the new container terminal is unstoppably embarking on a development path that will position itself as the main intermodal center of the North Adriatic, alongside the largest European ports.

“Therefore, I can freely say that this is the most important contract in the history of the port, because it will directly affect the development of the entire Rijeka transport route. From concessionaires, one of which is one of the leading container terminal operators in the world. With the commissioning of the terminal, the capacity of the port of Rijeka will be more than twice as large as it is now, when it comes to containers. Since the terminal will start operating in 2024, we expect that the total container traffic in Rijeka in 2025 will reach one million TEUs and a million and a half three years later. In a few years Rijeka will have a higher container traffic than Slovenian Koper. These figures speak of the future development of the port of Rijeka, as well as the city and its traffic ring”.

“For APM Terminals, development of this new facility is in line with our newly launched strategy of “Safer, Better, Bigger”. We want to grow our business where it makes sense and where our customers need us, and this is clearly the case with Rijeka”, shared APM Terminals CEO Morten Engelstoft.

“Building partnerships with global business systems has always been part of the business strategy at ENNA Group. APM Terminals and Maersk have been strong business partners for ENNA, and partners who share our values and our business vision. We firmly believe that our joint venture of investment into the Zagreb Deep Sea container terminal in Rijeka (Rijeka Gateway) will lay the foundations for further growth and sustainability of the port operations and logistics business in Rijeka and in the Republic of Croatia”, commented Pavao Vujnovac, President of the Board, ENNA Group.

“We see growing need for efficient, well-operated and modern gateway terminals, which serve as entry points to local and regional markets, bringing containerised goods closer to their end consumers. We are confident that Rijeka Gateway will become an important spot on the port logistics map, serving not only Croatia, but also the wider Central Europe region”, adds Morten Engelstoft.

“Rijeka Gateway and the modernisation of the railway infrastructure is Croatia’s largest national project that will connect the Port of Rijeka with continental Croatia and Central European countries, facilitating business opportunities and fast economic growth not only in logistics, but in all services and all industries. We are very pleased that after three years of cooperation between Maersk and ENNA Transport, we are starting a new partnership between APM Terminals and ENNA. We know that Rijeka Gateway will become an extraordinarily important factor in the logistics map of Europe”, comments Pavao Vujnovac. 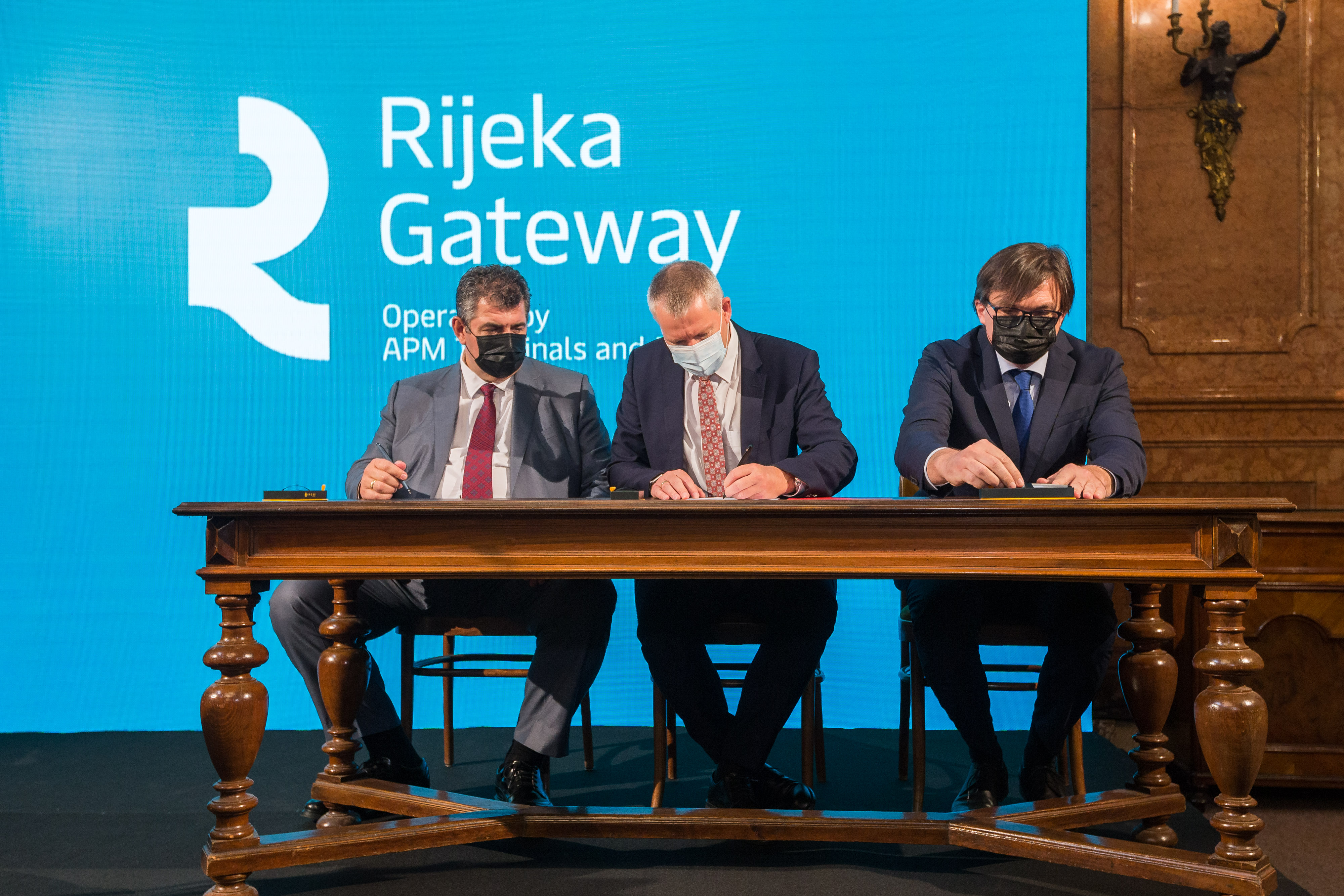 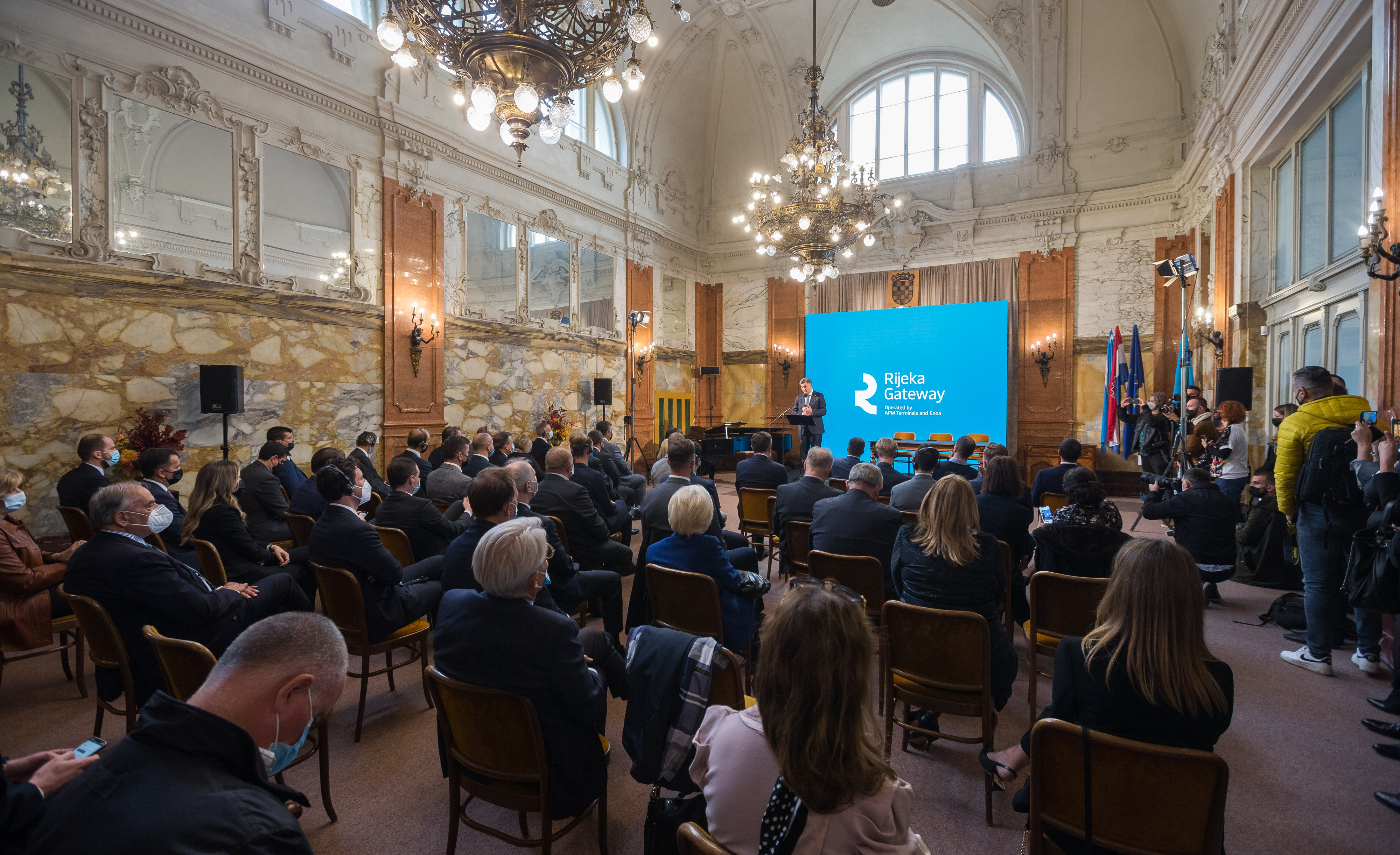 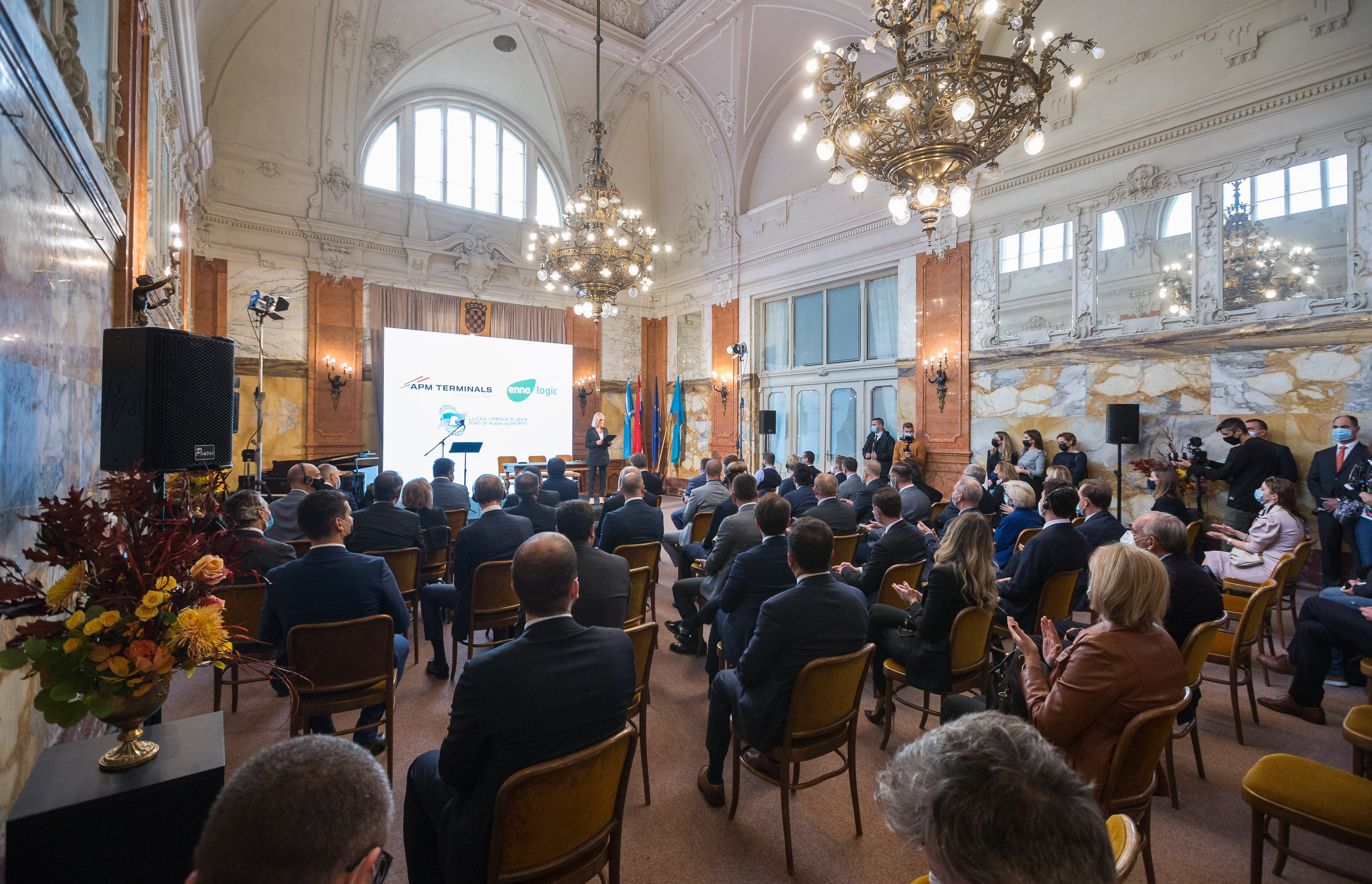 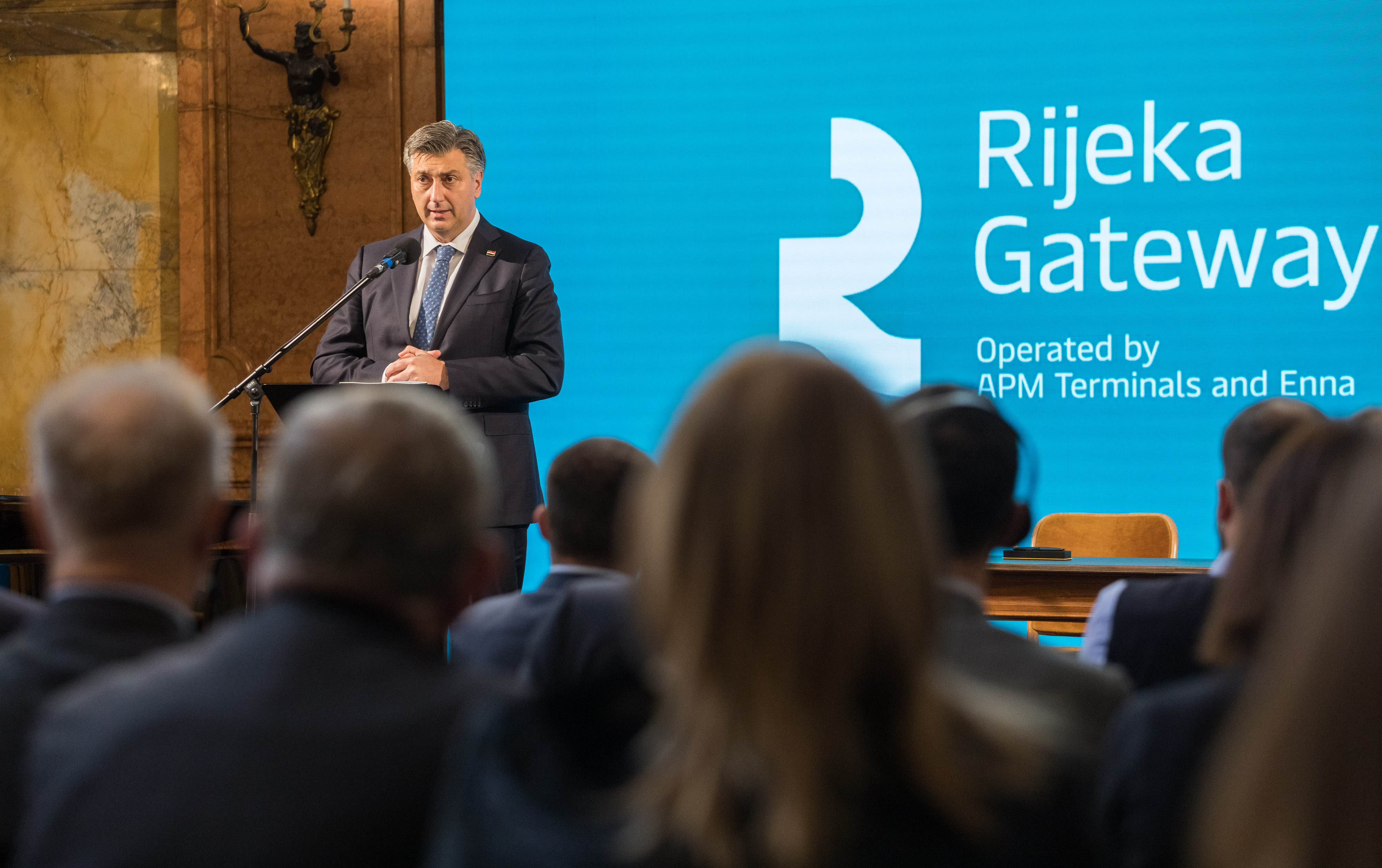 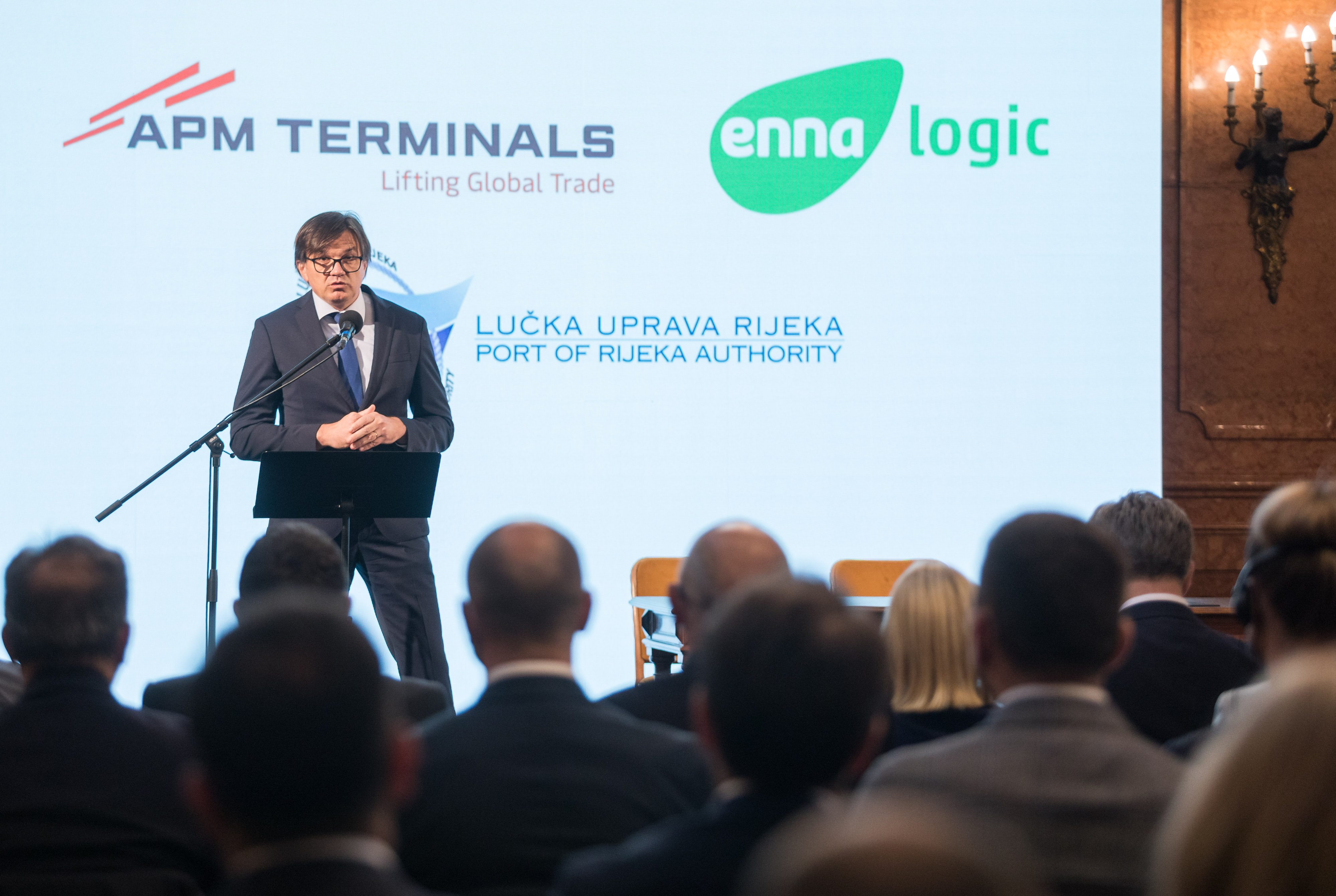 COMPLETION OF CONSTRUCTION WORKS AT THE NEW CONTAINER TERMINAL IN THE PORT OF RIJEKA Z...

Concession Agreement for development and ...

The public opening of bids in the procedure of granting a concession for the developmen...

Days of Maritime and Inland Navigation were held in Novalja, on the island of Pag, orga...