PORT OF RIJEKA IN THE TRANS-EUROPEAN TRANSPORT NETWORK

Port of Rijeka is connected to European transport road and railway corridors and common navigation and information systems. In addition to roads and railways, oil pipeline systems linking refineries in Croatia, Hungary, Austria, Bosnia and Herzegovina, Serbia, the Czech Republic and Slovakia are also regarded of great importance.

The comprehensive network represents the general layer of TEN-T and includes all existing and planned infrastructure that meets the requirements of the Guidelines and should be established no later than 31 December 2050.

The core network includes only those parts of a comprehensive network that are strategically most significant and should be established by 31 December 2030 at the latest. The European Commission Decision of 18 October 2013 defined the nine Corridors of the EU Core Transport Network as the backbone for the merger of 94 major European ports and 38 key rail and road airports in the major cities of Europe (Luka Rijeka and Zagreb Airport are among them) and the development of 15 thousand kilometers of railway infrastructure capable of achieving satisfactory speeds for passenger and freight trains as well as 35 border transition.

PORT OF RIJEKA AMONG PRIORITIES OF EUROPEAN TRANSPORT POLICY

Each of the corridors must include three types of transport infrastructure, pass through three member states and two border crossings. All nine corridors are the priority of the European Union’s transport policy, which is why an additional 26 billion Euro financial instrument called the Connecting Europe Facility (CEF) has been established.

1. Rhine-alpine corridor, passing through the Netherlands, Belgium, Germany and Italy

3. The Scandinavian-Mediterranean Corridor, which passes to Sweden, Denmark, Germany, Austria and Italy

4. Atlantic Corridor, which passes through Portugal, Spain and France

5. The Baltic – Adriatic Corridor, which passes to Poland, the Czech Republic, Slovakia, Austria, Italy and Slovenia

8. Corridor North Sea – The Baltic, which passes to Germany, the Netherlands, Belgium, Poland and Lithuania

9. Czech-Slovak Corridor, which passes between Czech and Slovak

EUROPEAN INFRASTRUCTURE PROJECTS OF THE PORT OF RIJEKA AUTHORITY

Port of Rijeka is a core port in the Trans-European Transport Network (TEN-T) Mediterranean Corridor, thus creating the basis for improving the hinterland connection, especially via the railways. This additionally has a positive impact on the development of port infrastructure and port modernization.

Therefore, the Port of Rijeka Authority has successfully withdrawn financial resources from the Connecting Europe Instrument for the purpose of improving the infrastructure of the port of Rijeka for a total of 7 projects, enhancing the port, railway and information and communication infrastructure.

CEF LIST OF PROJECTS CO-FINANCED BY THE CEF PROGRAMME:

In 2010, the European Parliament and the Council laid down rules for the establishment of a European rail network for competitive freight transport consisting of international freight corridors. The intention was to achieve reliable and quality freight services so that rail transport could compete with other types of transport.

Nine rail freight corridors have been put into operation in accordance with European Union (EU) Regulation no. 913/2010 on the European rail network for competitive freight traffic, which entered into force on 9 November 2010. This Regulation requires Member States to establish an international market-oriented rail freight corridor of RFCs to address the three major challenges:

Strengthen cooperation between infrastructure managers on key aspects such as route assignment, introduction of interoperable systems and infrastructure development finding the right balance between freight and passenger traffic along the RFC, providing adequate load capacity in accordance with market needs and ensuring that the common quality objectives are met for freight trains promoting intermodality between railway and other modes of transport by integrating the terminal into the corridor management process. Port of Rijeka is located on the RFC 6 freight corridor under the name of the Mediterranean Corridor, and in the immediate vicinity is the railway freight corridor of the Baltic Adriatic Corridor.

The Mediterranean Corridor RFC 6 is a total of about 7,000 kilometers long and connects the south of the Pyrenees Peninsula through the Spanish and French Mediterranean coasts, passes through the Alps in the north of Italy, then enters Slovenia and continues to the Hungarian-Ukrainian border. It passes through six states and connects 10 seaports and about 90 terminals. Its route covers the Rijeka railway and one of the historic and strategically important land routes of Rijeka to Hungary and Central Europe.
The Mediterranean corridor was extended to the Republic of Croatia on November 10, 2016 on the Rijeka – Zagreb – (Budapest) and Zagreb – (Ljubljana) routes, with the involvement of the Croatian railway infrastructure manager HŽ Infrastruktura. The involvement of the Republic of Croatia is an important event to create the basis for the future development of freight transport in the eastern part of the Mediterranean Corridor.

The Mediterranean Corridor for Railway Freight 6 (RFC 6) is aimed at achieving the following goals:

The port of Rijeka is not located on this corridor although it is physically connected by the railway line Rijeka – Šapjane – Ilirska Bistrica – Pivka in the context of the new EU transport system. The Baltic-Adriatic Corridor RFC 5 has a total length of 4,825 kilometers and is also passing through six states. Among others, it goes through Poland, the Czech Republic, Slovakia and Austria and connects Baltic ports in Poland with ports in the Adriatic, and a number of strong economic centers such as Warsaw, Katowice, Ostrava, Brno and Vienna. 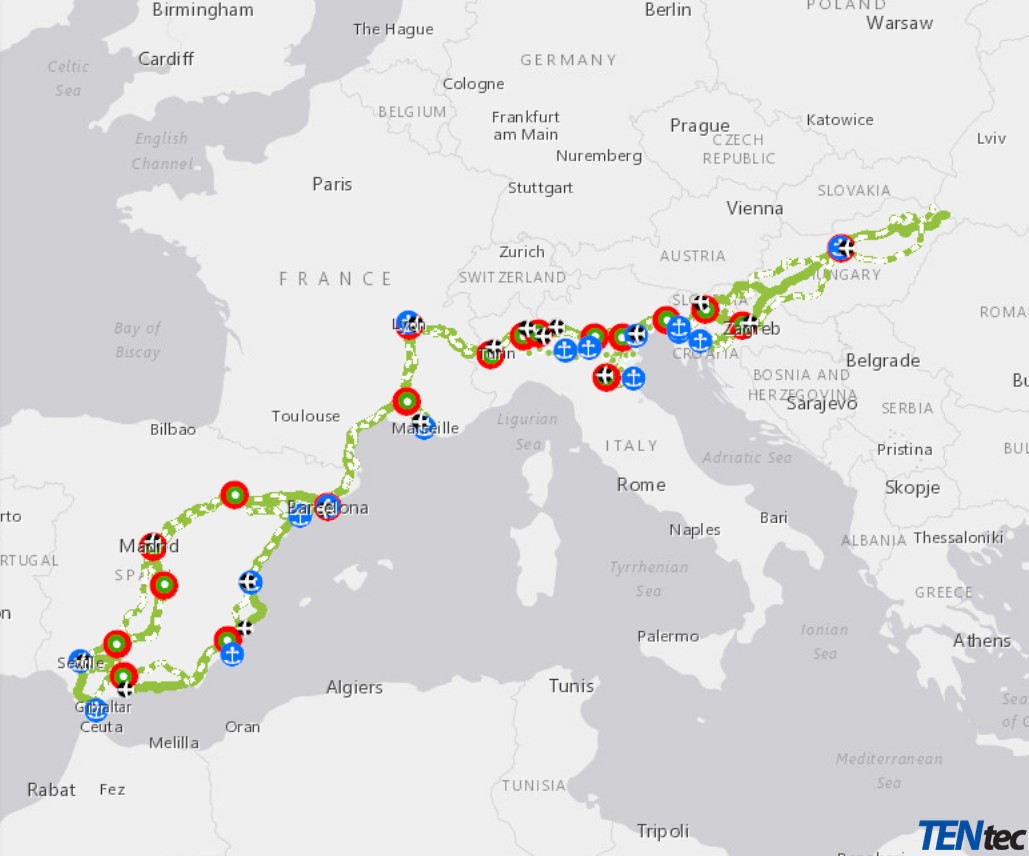 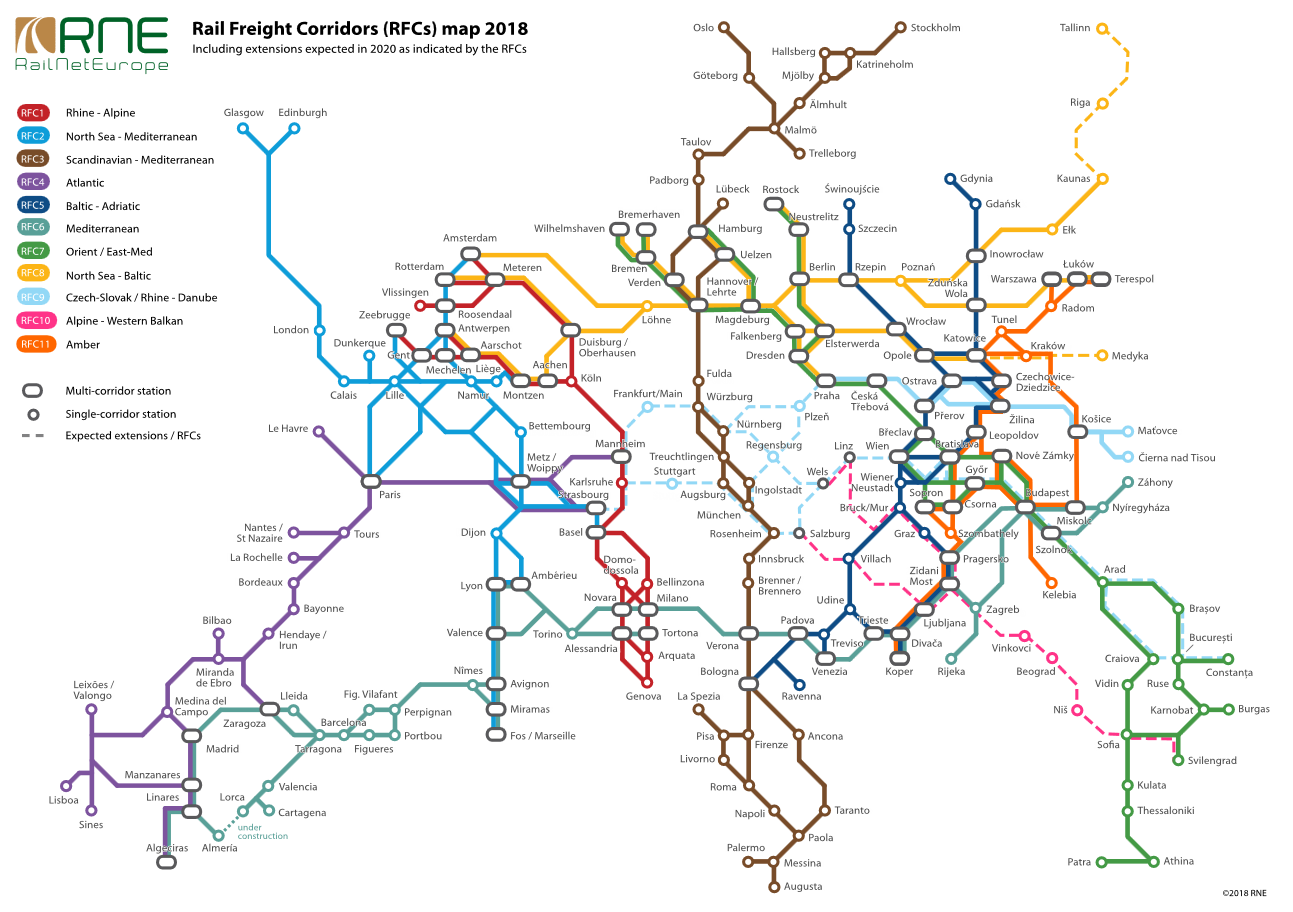