The signing ceremony of construction contract on the project “Upgrade of Port infrastructure – Zagreb pier” was held on Thursday, July 4, 2019, at 4 pm in the Marble Hall of the Maritime and History Museum of the Croatian Littoral in Rijeka. The event was attended by the Minister of Sea, Transport and Infrastructure Oleg Butković, Deputy County Prefect of Primorsko-goranska Marina Medaric and Deputy Mayor of the City of Rijeka Marko Filipovic
Construction contract worth 199.402.960.51 Kn (159.522.368,41 kn without VAT) was signed by investors Denis Vukorepa, director of the Port of Rijeka Authority, and Ivan Kršić, President of HŽ Infrastrukture Ltd., with selected contractor, company  Ž – Železniško gradbeno podjetje  Ljubljana j.s.c. represented by Tine Svoljšak.
The grant agreement for the project was signed on November 18, 2016 between the Innovation and Networking Agency, the Port of Rijeka Authority and HŽ Infrastruktura Ltd. The project was granted with 85% co-financing by the Connecting Europe Facility (CEF). The total value of the project is 31.6 million euro, of which the maximum EU contribution amounts to 26.8 million euros.
Works on the reconstruction of the cargo part of the railway station Rijeka and the construction of the intermodal terminal at the Zagreb Deep Sea container terminal will be performed in three stages:
• Reconstruction of the cargo section of the railway station Rijeka, which includes the reconstruction and extension of 12 tracks and drainage, cable drainage and installation of telecommunication cables, power and lighting cables as well as works on the contact grid and works on the lower structure in order to improve bearing capacity and drainage (investor HŽ Infrastruktura Ltd.)

• Construction of conveyor belt connections and construction of cable sewerage in the area of reconstructed railway freight train terminals and terminals to the existing condition (investor Rijeka Port Authority).

• Construction of four 400 m long tracks on a new part of the container terminal and two tracks for portal cranes (investor Lučka uprava Rijeka).
Works will implement the project objectives by removing the bottleneck and adapting the railway infrastructure at Rijeka Railway Station and by building an intermodal terminal at the new Zagreb Deep Sea Container Terminal, which will enable the improvement of intermodal infrastructure of the port of Rijeka, the relocation of transport by modal shift from the road to the railway and the accomplishment of a more quality transport connection Rijeka with the Core Trans-European Transport Network (TEN-T).
This joint project of Port of Rijeka Authority and HŽ Infrastruktura Ltd. contributes to the development of the port of Rijeka as one of the main ports in the Mediterranean Trans-European Transport Corridor by achieving a high level of efficiency in freight transport in line with contemporary European interoperability and intermodality requirements.
Executive director of the Port of Rijeka Authority Denis Vukorepa stated that the project is one of the four essential segments necessary for the entire functioning of the Zagreb Deep Sea Container terminal along with its construction, the upcoming construction of the D403 road and the concession granting of terminal (procedures are in progress). “All of these four segments will be completed in two to three years, and the port of Rijeka in 2022 will become the port with the largest container capacity in the northern Adriatic,” Vukorepa said.
“This project will stimulate the development of the competitiveness of the port of Rijeka,” said CEO of HŽ Infrastruktura d.o.o. Ivan Kršić, stressing that documentation for the construction of the bridge Škrljevo – Rijeka – Jurdani is under construction. Deputy Mayor Marko Filipovic welcomed with his speech, expressing hope that in the next seven-year financial period of the European Union Rijeka will be a place to invest in major development projects, while Minister Oleg Butković noted that the efforts of the  Port of Rijeka Authority and the HŽ infrastructure have shown that good co-operation and coordination and funding from EU funds can successfully implement large projects.
Tine Svoljšak, director of the company SŽ – Železniško gradbeno podjetje  Ljubljana d.d. emphasized that the signing of the construction contract on the project “Upgrade of Rijeka Port infrastructure – Zagreb pier container terminal” represents an important milestone in business and business development for the company SŽ – Železniško gradbeno podetje Ljubljana j.s.c. This is not the first project the company undertakes in the Republic of Croatia, but it is certainly the largest and the most important. 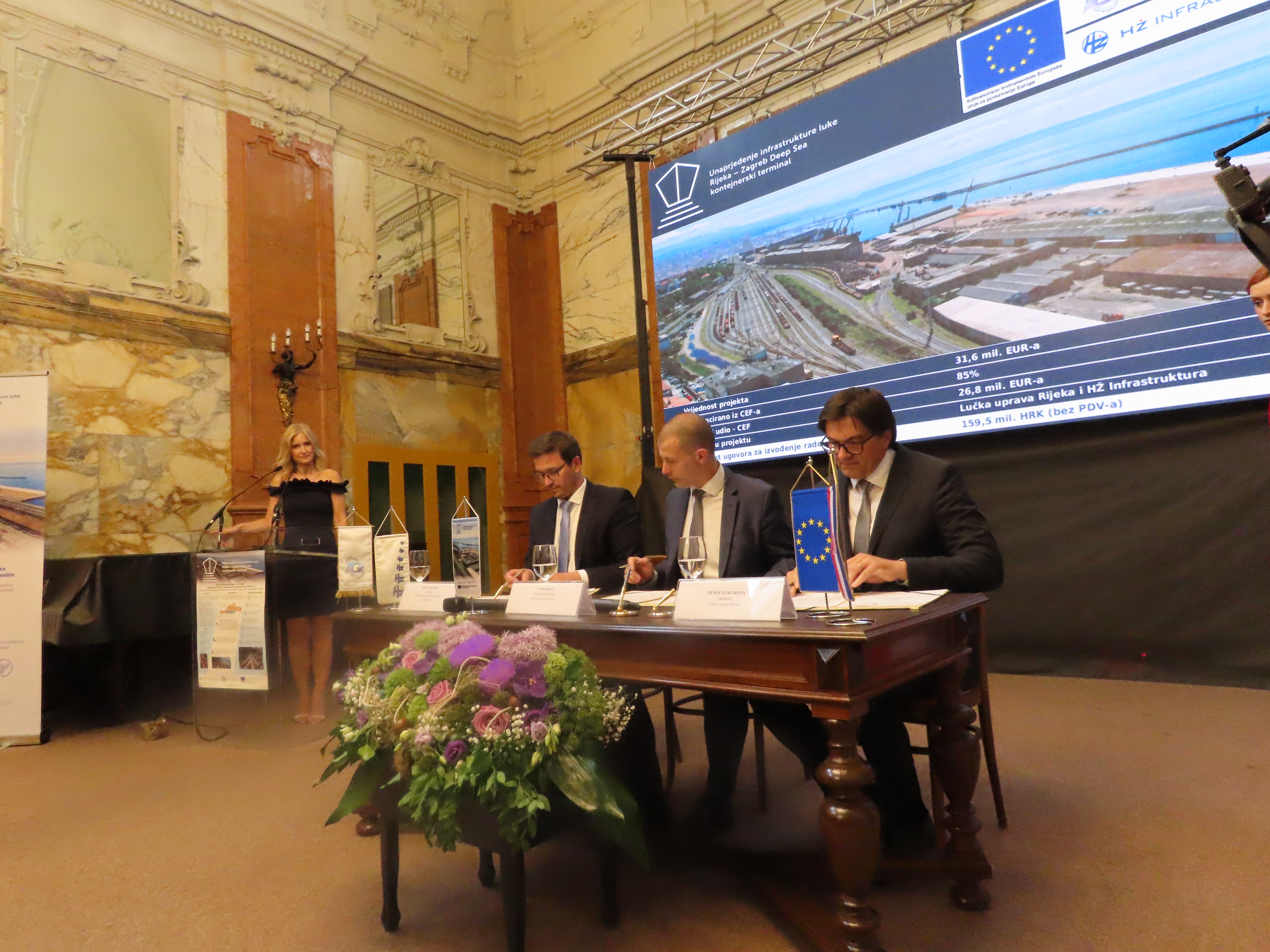 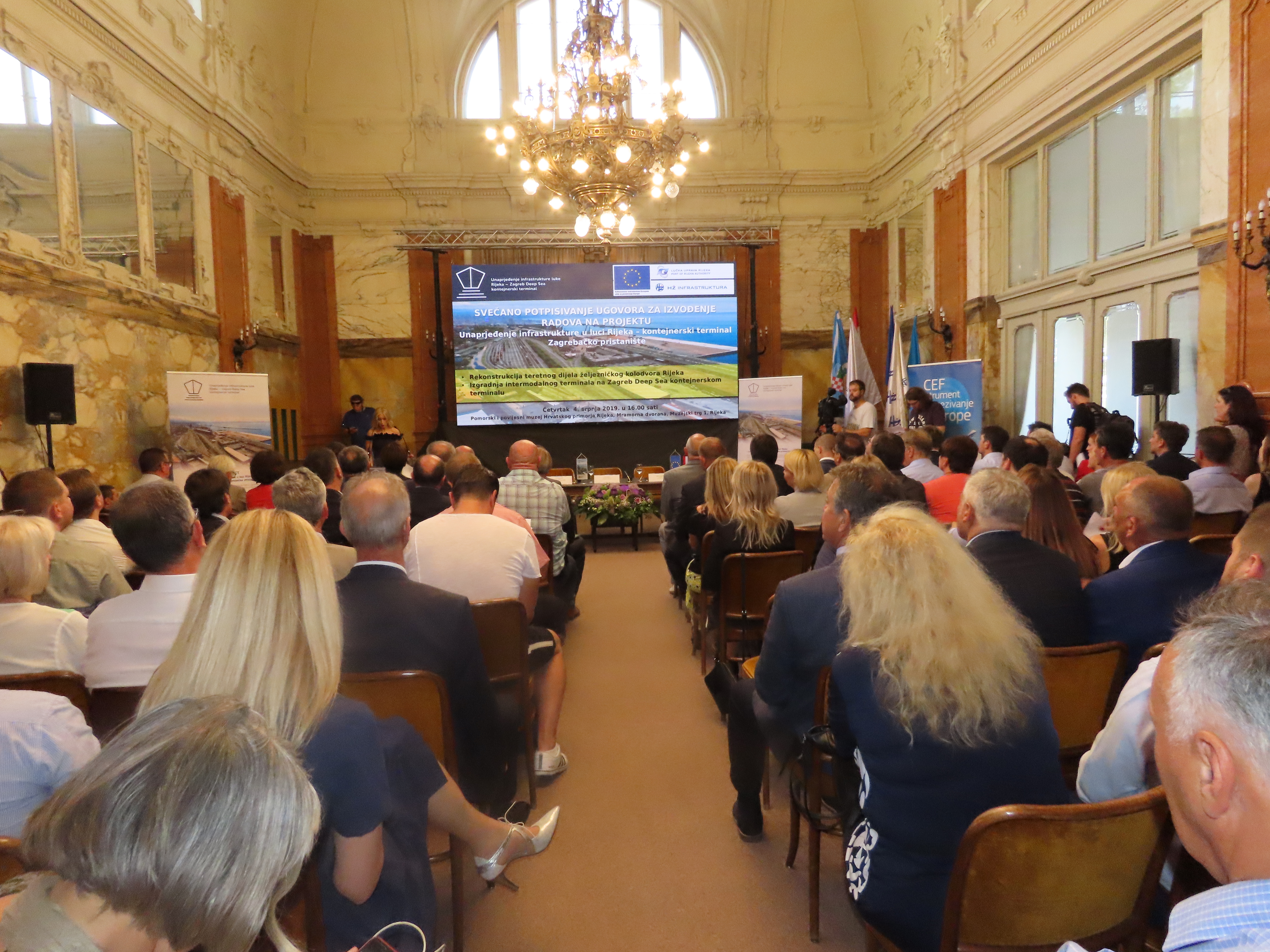 COMPLETION OF CONSTRUCTION WORKS AT THE NEW CONTAINER TERMINAL IN THE PORT OF RIJEKA Z...

On Monday, March 9, 2020, at the Port of Rijeka Authority an official opening of the su...

Works on the project "Upgrade of the Port of Rijeka infrastructure - Zagreb Pier contai...