So far, cruise liners who were deeper that 7 meters in draft have moored at the container terminal Brajdica. This investment increased the capacity of the Rijeka port in the Rijeka Basin and provided the conditions for mooring larger cruise ships and larger merchant ships closer to Passenger Terminal and centre of the city of Rijeka.

The new pontoons are prepared for the upcoming cruising season of 2020, which is expected to double the number of cruise ships in Rijeka according to current announcements. In the cruising season of 2020, the Port of Rijeka Authority expects 41 cruise ships with the expected 74,000 passengers and 30,600 crew members in the period since May to the end of October. This means that twice as many cruise ships and twice as many passengers and crew (105,600 people) will visit Rijeka next year than this year. The data is not final because the announcements for next season are still in progress and the final number of berthings may be even higher after the announcement is concluded.

Since the arrival in Rijeka has announced twice the number of cruise ships, it can be concluded that the new pontoons provide the much needed additional capacity for the upcoming cruising season in 2020.

The City of Rijeka, the Rijeka Tourist Board, the Kvarner Tourist Board and the Port of Rijeka Authority have been jointly pursuing a number of activities for the development of Rijeka into a recognizable cruise destination in Kvarner for several years. Next year, Rijeka is the European Capital of Culture, which represents an excellent opportunity for the wide promotion and positioning of Rijeka in a recognizable tourist cruise destination in Kvarner. Cruise tourism is a driver for the development of numerous service industries and a source of income for the private and public sectors, from ports and cities to cruise companies, tour operators, maritime and tourism agencies, so its effects on the economy are of great local, regional and national importance. The project being presented today is a direct support to the development of Rijeka as a cruise destination and an important step in the effort to retain the existing cruise line who have already included the Rijeka port in their cruise itineraries in the coming season and to attract additional new lines visiting the port in the coming years.

At the press conference, a new investment and announcement of cruise ship arrivals in 2020 and 2021 were presented by Denis Vukorepa, Executive director of the Port of Rijeka Authority, Petar Škarpa director of the Rijeka Tourist Board and Ivan Ivić, Chairman of the Board of the Dalmont Shipyard Ltd.

Denis Vukorepa, Executive director of the Port of Rijeka Authority further explained that numerous construction works are underway in the Rijeka port area. Due to the start of work at the Brajdica container terminal and the difficult working conditions at Brajdica, new pontoons become even more important for the reception of larger cruise ships due to the inability to moor at the container terminal. Also,  Rijeka will become the European Capital of Culture in 2020 with twice as many cruisers who will arrive in the city.  Vukorepa announced that 40 cruises are already announced for the 2021 cruise season already, so that number will certainly grow in two years.

Recalling the investments in progress or underway, the Executive director of the Port of Rijeka Authority pointed out that the port of Rijeka is in a major investment cycle. Asked when he was about to start construction of the marina in Porto Baros, Vukorepa said that the GUP (General Urban Plan) changes are awaiting adoption. And when they are voted down by the City Council, they start preparing for the new marina. In addition, he announced the preparation of a new project called South Berth, which would be a long-term solution for passenger ships, including ferry boats and cruisers. The preparation of project documentation is ongoing and the investment is estimated at around EUR 30 million. After the prepared documentation, the project will be applied to EU funds.

Petar Škarpa, Director of the Rijeka Tourist Board, expressed his satisfaction with the cooperation with the Port of Rijeka Authority and the City of Rijeka on attracting cruisers into the city and the fact that the number of cruisers is increasing by 100% annually, which will result in the arrival of 40 ships at the time when Rijeka becomes European the capital of culture. He noted that there is also an increase in the arrival of smaller boats, that is, tourist sailing ships. Over 100,000 people will visit Rijeka in the cruise segment, in total on both small and large ships. As for the economic effects, he stated that they were increasing because visitors stayed in Rijeka all day, walking around the city, using the services of buses, tour guides, restaurants. And the sailing ships also provide supplies for a seven-day trip. In its efforts to develop cruise tourism, the objective of the Rijeka Tourist Board in the coming years is to reach 50 large ships a year. Regarding  the financial indicators, he said that cruise guests at the Croatian level spend about 50 euros a day, and Rijeka is no exception. if this is multiplied by the announcement of the arrival of 100,000 passengers on cruisers in 2020, it can be estimated that Rijeka will cruise around EUR 5 million from cruising in the future.

Ivan Ivić, president of the Board of Dalmont Shipyard, Ltd. presented the pontoons and the quality of their construction and determined that they were made earlier than agreed. He added that they are waiting for a tender for reconstruction of Galeb in Dalmont, and they have one new ship building in the announcement. 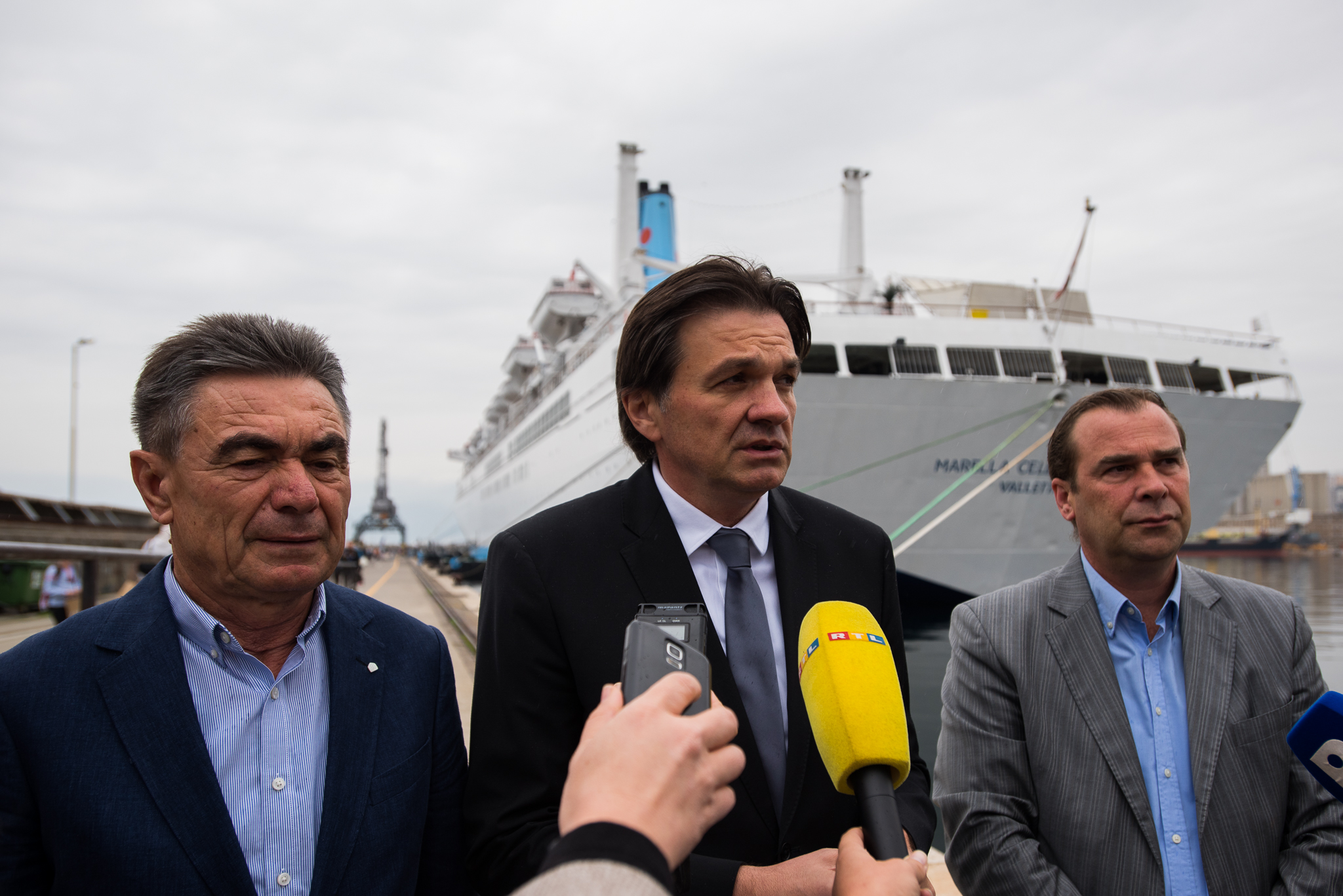 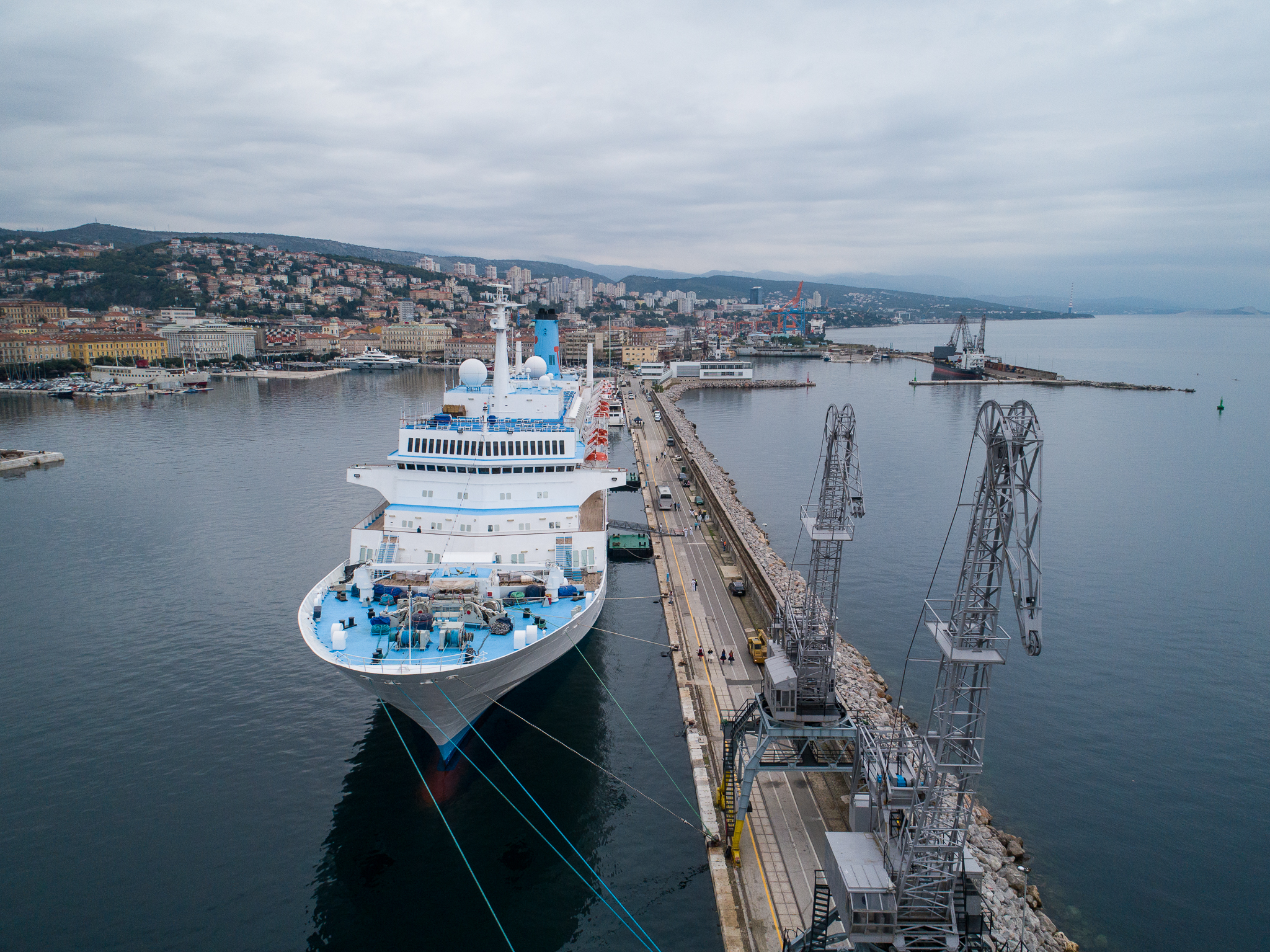 Early in the Saturday morning, on July 2, 2022, two cruise ships sailed into port of Ri...

For many years, the access to the edge of the Adamic pi...

An increase in interest in Rijeka as a cr...

A working group meeting of the Commission for the Devel...

The Port Authority of Rijeka won the 4th Festival of To...

Cruising season launched in the Port of R...

Launching of the cruising season in port ...

Port control centar - on June 1st, 2021, Hydrographic Institute of the Republic of Croa...

The European Capital of Culture 2020 was officially ope...